Just in time for our DEF CON workshop “Constructing Kerberos Attacks with Delegation Primitives”, Microsoft failed to meet the disclosure deadline, and so we publish another primitive that can be abused to achieve Windows Local Privilege Escalation (LPE). It affects all domain-joined Windows 10 hosts by default, as well as Windows Server 2016 and Windows Server 2019 that have the WebDAV Redirector feature installed.

This attack is very similar to the LPE attack chain that we disclosed in “Wagging the Dog”. Actually, it is identical except for the primitive used to initiate the attack chain.

If you are not up-to-speed with the intricacies of Resource-Based Constrained Delegation and NTLM Relay, I highly recommend reading Wagging the Dog before proceeding. All the information in the reminders below is explained in details in Wagging the Dog.

I’ll open with a very short reminder for those who are too busy to read Wagging the Dog. We found that Resource-Based Constrained Delegation suffers from the following insecurities:

If any of the above is not clear, please read Wagging the Dog before you proceed.

When performing an NTLM relay attack to LDAP, if the Negotiate Sign flag was set during the NetNTLM exchange the target server will ignore messages that are not signed, making the session useless. Luckily, not all clients set the Negotiate Sign flag. The most notorious one is the WebClient, which includes the WebDAV client as well.

By default, the WebClient will authenticate using “default credentials” (whatever credentials are in LSASS for that logon session) for targets in the Trusted Zone or the Local Intranet Zone. However, this is not an obstacle because Active Directory Integrated DNS (ADIDNS) allows all domain users to add new DNS entries, which enables getting a rogue WebDAV relay server into the Local Intranet Zone.

Once again, if any of the above is not clear, please read Wagging the Dog before you proceed.

Very similaly to the account profile picture primitive, when a user personalizes their lock screen, SYSTEM attempts to access the file specified by the user, which means that the host’s computer account will be used to authenticate to network resources.

It is a small and meaningless operation; not an arbitrary file write/delete. But that is all we need.

The attack chain works as follows:

The following diagram illustrates this scenario: 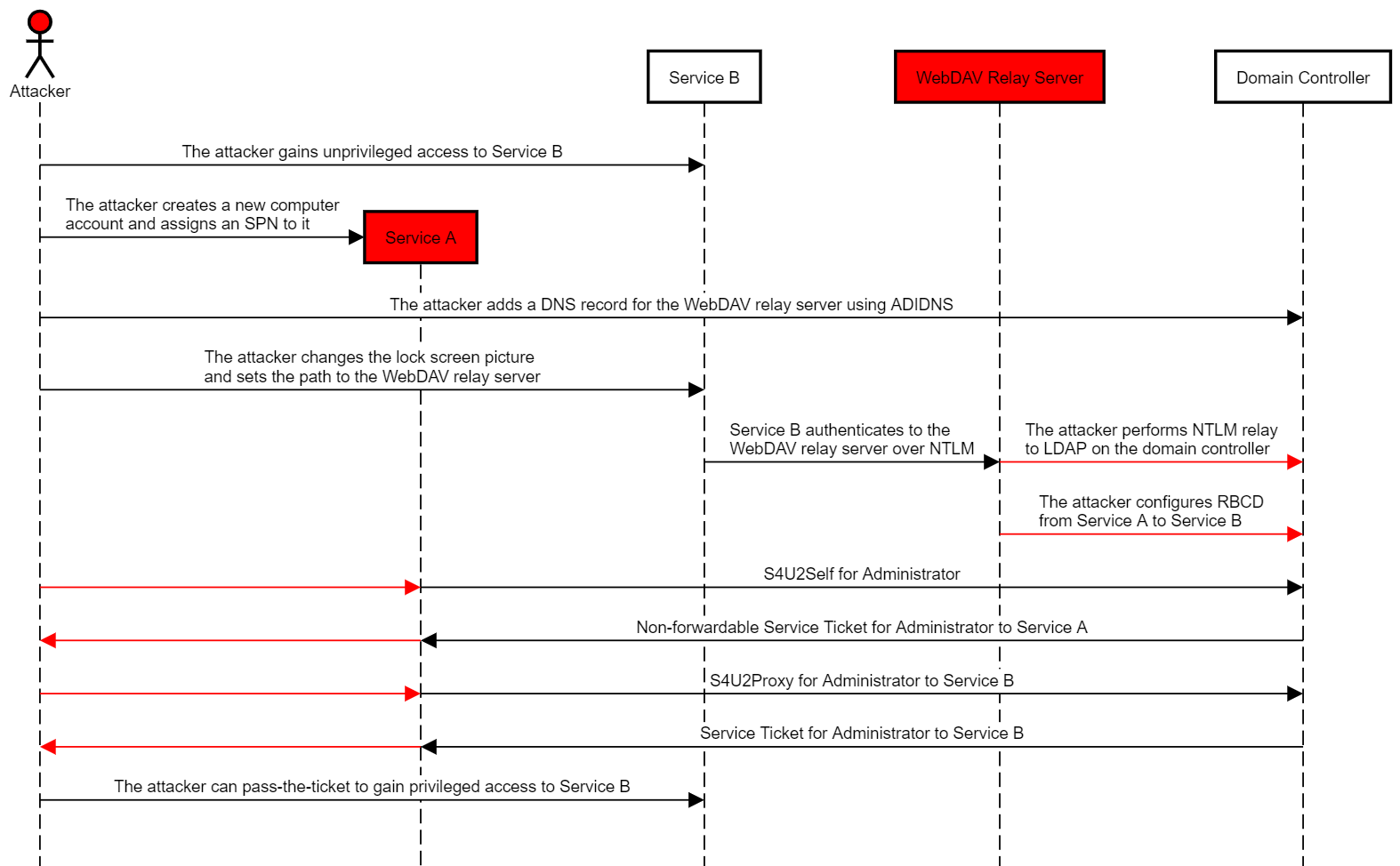 Video demonstration of this attack chain:

The following conditions must be met for this attack:

In addition, the attacker needs only one of the following:

The following versions of Windows are affected:

The following factors may mitigate this attack chain:

This attack chain is very easy to detect:

Please refer to the Detection section of Wagging the Dog for more details.

There are many similar primitives out there that lead to RCE or LPE. Until Microsoft decides to address this issue, countless environments remain vulnerable to this class of attacks by default, as explained in detail in Wagging the Dog. I encourage everyone to keep hunting for these primitives to help Microsoft understand the gravity of the issue and finally address it.